The Rounsville name was highly associated with the Fowlerville area during the late 1800s and into the early 1900s -- grain elevators, coal business, real estate, active businessmen. But it would appear, like with many residents of Fowlerville, Lansing had a draw that took many people to the big city.
And that included one of the Rounsville men -- F.N. to be exact -- who moved to Lansing in 1907. Since the address was given in the article shown below, I decided to do a little investigating. Google makes that very easy.
I typed in the address -- 1017 North Capitol Avenue -- and found that the house no longer exists, but a very large Lutheran church now stands in that address location. I was hoping to possibly see what this fine $6,000 house might have looked like, but to no luck. 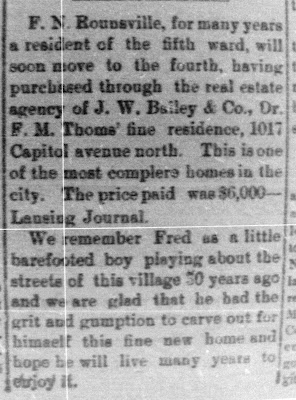 Is F. N. Rounsville the same person previously referred to in The Fowlerville Observer Articles as F. G. Rounsville?