For today's squint shot, this is a slightly different 'then and now' concept -- basically, both are from 'then.'  The first photograph is ca. 1940 of the southeast quadrant, when the Standard Station was located at the corner of South Second Street and East Grand River.  The first building to the west of the gas station was a dime store at the time -- Line's, to be exact.
This storefront was a satellite of the main store located in Howell.  I never really gave it much thought about where the store might have been in Howell but a couple of weeks back, when we were in Howell to check out a Mexican restaurant as well as Main Street Winery, an etched stone caught my eye. 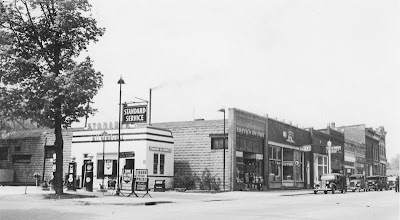 At the southwest corner of Grand River Avenue and D119, the brick building which houses Mr. B's Tavern on the ground floor, look up to the roofline facing Grand River Avenue.  There, etched in stone, with lines and flourishes, you will find 'Line's.'  Was the whole building their dime store or just the ground floor?  If anyone remembers Line's in Howell, it would be fun to hear from them. 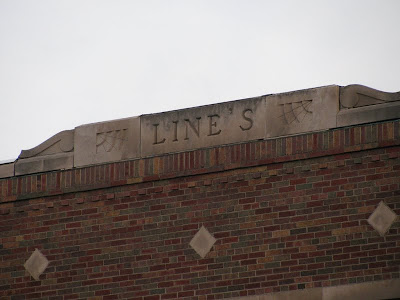 The ground floor and basement were the dime store. If there is a second floor, I don't remember if that was part of the store.