S.T. Blackmer now occupies the fine new double store just erected for him by Mrs. W.J. Miner, which is probably the finest exclusive clothing store in this part of the state, and with the new showcases and clothing store furniture, enables him to display his large stock of clothing and shoes to the best advantage to himself and customers.  He has built up a fine business during the years he has been located here and may be justly proud of his success.

When I was working on The Fowlerville Chronicles, I spoke with a few people around town, looking for anecdotal memories and possibly pictures.  Frank and Ann Utter, previous owners of the men's and ladies clothing store in town, which was owned for many years by the Blackmer's, offered up a couple of pictures for me to use in the book.

At the time, it was estimated these were taken around 1906.  I came across the above article that was published in The Fowlerville Review in late 1905 with mention made of new showcases and furniture.  I'm thinking we were pretty close on dating these photographs; they follow: 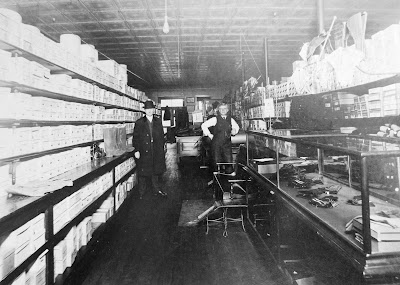 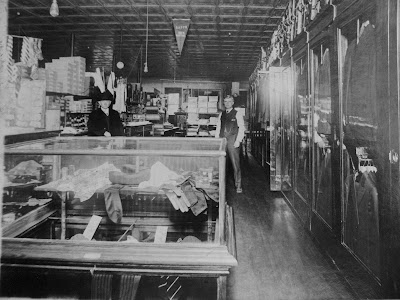 The following week an article reported on the grand opening:
S.T. Blackmer gave an opening day in his new store last Saturday. The store was tastefully decorated with flowers and an orchestra consisting of Prof. VonRichter, W. Drew, and Nellie Gardner discoursed some very fine music during the day and evening.  A fine sourvenir in the shape of a beautiful calendar was distributed to those who attended.  A large number of Mr. Blackmer's customers and friends also called to congratulate him upon the growth of his business which called for the elegant new quarters he now occupies and to hope that his success might continue.
Posted by amuse me at 1:10 AM

now you can find free b2b companies for business trading.