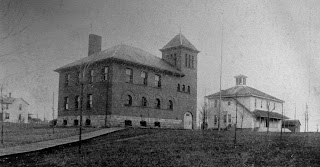 In 1901, this picture shown above, along with the following caption, was published in The Fowlerville Review:

The Fowlerville Union Schools will be opened on Monday, September 2, under the tuition and management of a most competent corps of teachers and armed with all the necessary appliances in every department for comfort and convenience in the expedition of school work. It is reasonable to predict that our school, through the coming year, will be characteristic of the past, and the high standing and reputation so well earned be fully maintained. As in the past, non-resident pupils are most cordially invited to attend, and the low rate of tuition is unchanged.

Our school catalogues may be had by calling at the bank of J.C. Ellsworth, at Mr. Gardner's drug store, or at my office; or will be mailed on request.~~F.G. Rounsville, Director

The picture, showing both the white, wooden schoolhouse and the red brick building, has been an iconic pictures for the early Fowlerville schools. It has been used for postcards, put on display at various functions, and found in various publications for the village. Both structures were on North Collins Street and neither building exists any longer. The wooden schoolhouse burned in 1921 and the brick structure was razed in 1957.