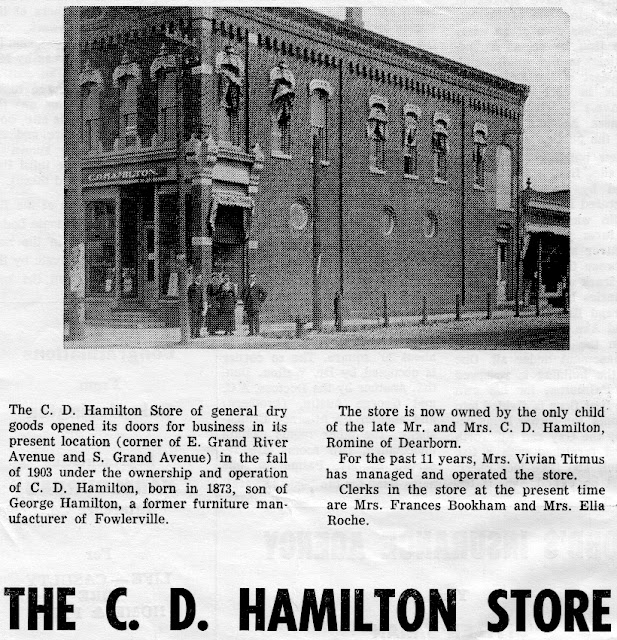 The above article/advertisement in the 1961 125th special edition paper gives a lot of information in just a few paragraphs.  Does anyone remember Mrs. Vivian Titmus, or Mrs. Frances Bookham and Mrs. Ella Roche?  If so, would love to have you leave a comment, which by the way is very easy.  You can either leave an anonymous comment or you can create a blog name and password to leave your comment.

Looking at the picture above, it is hard to tell if the sidewalk they are standing on is cement or plank wood, but during this early era of 1900, cement sidewalks were the "next best thing to slice bread" -- which really didn't happen until 1928.  But one article I found in late 1904 reported:

The new strip of cement walk on the east side of Grand Avenue is one of the most noticeable improvements made in this village in some time.

Another article found in The Fowlerville Review in 1904 discussed the quality of cement as follows:

A vast amount of the beautiful and supposedly durable cement sidewalk has been constructed in Michigan within the past three years and heretofore it has been thought to be well-nigh indestructible.  Now comes a note of warning from a close observer who says that in various sections these walks are being honeycombed and ruined by theh work of ants which delight to build their nests in the sand and gravel forming the foundations of the cement walks.

Also, back to C.D., I found the following profile published in the newspaper in 1905:

Claude D. Hamilton was born in this village July 8, 1873, and is decidedly a home product.  When but a boy, he commenced clerking in the store nights and mornings, and kept at it until he passed through the tenth grade, when he accepted a steady position with F.G. Palmerton & Co., and with the exceptions of a few weeks, remained with that firm until the fire of 1891, when, in company with G.A. Newman and C.F. Elliott, they purchased the stock of F.G. Palmerton & Co. and continued the business until the death of Mr. Elliott, when the remaining partners purchased the interest of the estate of Mr. Elliott and continued the business under the firm name of Newman & Hamilton until June, 1903, when he sold his interest to Mr. Newman and after a few weeks rest, purchased a new stock of dry goods, carpets and gents furnishings and opened the store where he is now located.

In October 1898, he married Miss Ethel Gardner, and a little later erected the pleasant home he now occupies.

He has served the village as councilman for two terms and is now serving his second term as township clerk.