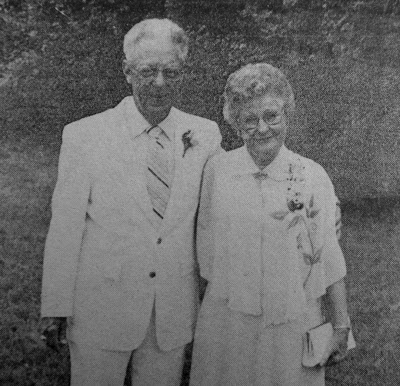 In the Fowlerville News & Views June 29, 1987, issue, the above picture was shown with the following caption for the Douglass' 50th wedding anniversary:

Stirling and Dorothy Douglass celebrated their 50th wedding anniversary on Saturday, June 20, with a buffet-reception and dance at the Woodshire Place in Fowlerville.

Approximately 300 persons attended the affair, which saw the couple renew their wedding vows during a special ceremony.

In attendance for the renewal of vows was the couple's original wedding party -- Ralph "Bud" Swinehart of Mason as best man, Pauline (Eckhart) Lillywhite of Ellenton, Florida, as matron of honor, Barbara (Reed) Crawford of Monticello, Indiana, as flower girl, Mary Peterson of Fowlerville who was the pianist, and Viola Lintemuth of Fowlerville, who was the soloist.

Lee Talboys, who was the entertainer for the afternoon, sand "Because" and then Rev. Paul Amstutz performed the ceremony.

Stirling Douglass and Dorothy Eckhart were married on June 20, 1937, at the Stowe farm on Stowe Road in Conway township.

They have three children and their families who were in attendance -- Jackie Hibbard, John and Debi Douglass, and Jerry and Jackie Douglass.  There are 10 grandchildren and 3 great-grandchildren.

Five years later, there was an announcement in the paper for their 55th anniversary celebration.
Posted by amuse me at 1:00 AM