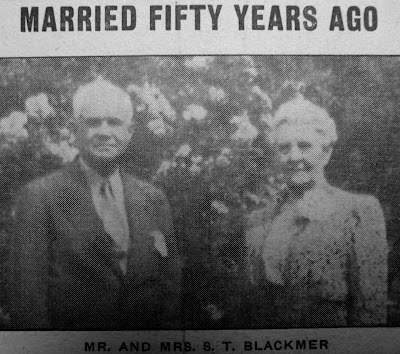 S.T. Blackmer and his wife, Mattie, were married in 1890.  When they celebrated their 50th wedding anniversary, the following announcement, with some very interesting tidbits of the early days, was published in the local newspaper:

Mr. and Mrs. S. Thurlow Blackmer will celebrate their 50th wedding anniversary Monday, September 9th.  Sunday, they will entertain their family for dinner, in commemoration of the wedding day.

They were married in Corunna, Michigan, where Mrs. Blackmer was born and spent her girlhood.

In 1896, they moved to Fowlerville and opened the clothing and furnishing goods store here, and still continue the business.  He also held an interest in the G.F. Minto men's furnishing wholesale business in Detroit.


Mr. Blackmer has spent practically all his life in clothing, having clerked for the C.R. Mably and Co., in Detroit for some time.

Mr. Blackmer's first trip to Fowlerville was by bicycle to inspect the town, later he brought his family here with horse and buggy over stoney dirt roads.  They have watched the town grow from old frame buildings to brick, from dirt to paved roads and many other improvements and they are sincere in saying no town can compare with Fowlerville.
Posted by amuse me at 1:00 AM