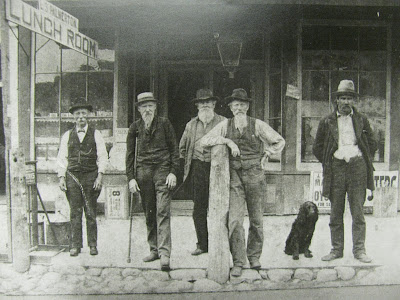 While doing research for The Fowlerville Chronicles, I came across the above picture in the Howell Archives.  It was difficult at the time to date this photograph, but we are lucky enough to have had Nellie Glenn, Fowlerville's historian back in the 1950s and 60s, write names on the back of the picture.  She indicated the man second from the left, with the crutch, as L.S. Palmerton.

While doing additional research, this time for Through the Eyes of a Country Editor, I found the date of this picture.  An article in 1905 in The Fowlerville Review, read as follows:

L.S. Palmerton has rented the building formerly occupied as a millinery shop, first door north of McIntosh & Stevens, and has opened his restaurant business there.

Curiously, only a mere couple of months later, the following was found:

L.S. Palmerton has closed his lunchroom and gone out of business.

The building recently occupied by L.S. Palmerton has been rented to Lansing parties, who will conduct a fruit and confectionery store, so we understand.

This storefront was bought by the Novara family and would someday become the storefront purchased by the Spagnuolo family.
Posted by amuse me at 1:00 AM