The following portion of the advertising poster has a wealth of businesses:
~~There's a guy standing at the upper right hand corner, holding a mug of beer -- any thoughts on who that might be?
~~VanGilder Farms, est. 1964, shows seven members of the farm at the corner of Marr and Owosso,
~~Dawn and Steve Horton of Fowlerville News & Views, est. 1985, are shown alongsie a two-story house -- does anyone remember where they were located in 1991?
Then across the middle of the portion of the poster:
~~the Michigan Veterans Memorial, with two ladies holding the sign, when it was located where the parking lot now stands at Mill and North Second streets.
~~Loco's Restaurant, est. 1991, where Olden Days now offers wonderful home-cooking by Chuck.
~~Fowlerville Decorating Center, since 1926, which now houses Maria's School of Dance.
~~Lockwood Insurance agency, with Stan and Joyce Lockwood, which now houses Gormley & Johnson, Attorneys.
~~Turning the corner onto East Grand River, Shear Image, when it was located on the north side of the avenue, which now belongs to Edward Jones.
~~The Shady Lady, with its slanted-wood facade, owned and operated by Patti Reis.
~~Proos Pharmacy, est. 1968, although this location has consecutively been a pharmacy for over a 130 years.
~~Save-On, est. 1985. 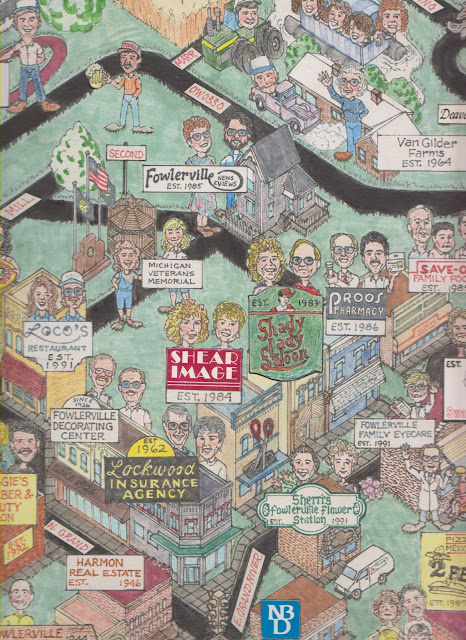 Along the bottom of this portion:
~~Harmon Real Estate, est. 1946.
~~Sherri's Fowlerville Flower Station, est. 1991, which eventuallly became the BeeCharmer and now houses a jewelry business.  This is also the location of Tomion's.
~~Fowlerville Family Eyecare, est. 1991.
~~NBD, which is now Chase Bank.
~~2Fers, now Duke's.