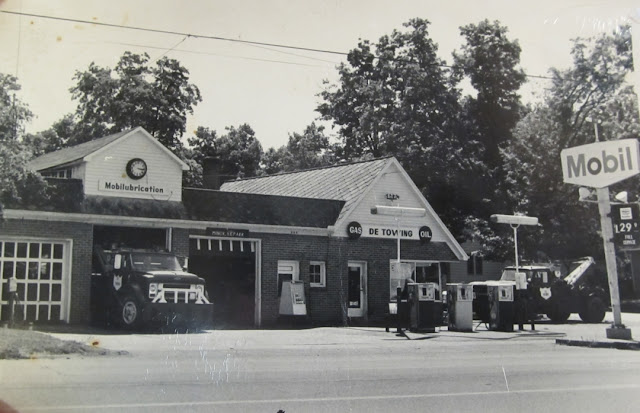 Here's a blast from the past -- does anyone remember DE Towing.  Dan Eldridge serviced the community out of the building at the southeast corner of South Collins and East Grand River Avenue.

Some of the information Mr. Eldridge offered up follows:

The building was built 1928-29 and opened with Barnsdall gas and oil products, Manager Ed Fields and Mac Kenzie.  The west side of station was a restaurant operated by Tressa Newman and cook Ed Barber.

By 1933, station manager was Alden Tomison.

1933, the station manager was Lorraine Grill and the restaurant closed the following year and the station was remodeled.

By 1938, the station manager was Bill Smith, and in 1943 it was George Soules, then in 1946 there were managers Jiggs Harmon and Francis Martin, and in 1947, Gilbert Rossetter was the manager.

In 1948, Wayne Eaton took over as manager, then a couple years later it was Lorraine Grill.

In 1951, the station sold Flying Red Horse gas and oil products, but within five years Mobil products were sold.

In 1958, Allen McPherson became the station manager for a year, then again Lorraine Grill.

By 1968, Norm Grill was the station manager and in 1970, Dan Eldridge and Charles Trim shared the responsibilities.

In 1982, the gas station became Total Gas, and a year later Dan Eldridge owned the facility.
Posted by amuse me at 1:00 AM

In 1931 you have Glesson Allen as the manager, but his name was Clesson (with a C). He was my grandfather but he died before I was born. I knew he worked at the Mobil and at the Standard station but I never had any details about it.