In an 1859 map of Fowlerville, "GM" is indicated just below the center of the map which signifies "grist mill." This was the Fish and Palmerton grist mill. 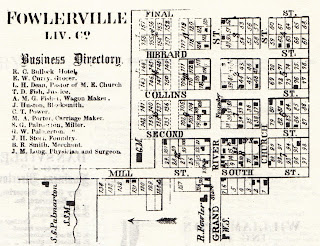 In 1895, a tragic fire destroyed this first grist mill built in Fowlerville. It was through the generosity of Ralph Fowler, land and money were given to help in building the mill in order to further the growth of the area. The following recount was given in the local newspaper, The Fowlerville Review, after the fire occurred:

Gone Up in Smoke~~On Tuesday morning at a few minutes after seven o'clock, the cry of fire sounded over this village and the dense volume of smoke that came pouring from the doors and windows of the grist mill easily showed the location of the conflagration. A large crowd soon gathered but the flames had spread so rapidly that nothing could be done to save the mill and contents and in a very short time, it burned to the ground, with all of its contents. Two men, Ora Chambers and Will Osborne, were at work in the lower part of the mill at the time, one in the engine room and one in the basement. Mr. Chambers saw a light through a hole in the floor and rushed upstairs, calling to Osborne as he went and they each took one of the patent fire extinguishers but the machines failed to work properly and in almost less time than it takes to read this item, the fire had spread over the entire lower part of the mill and the numerous elevator spouts communicated it to the entire building, assisted by the fine coating of dust which ignited almost like powder. The men think the fire caught from the stovepipe, as Osborne was at the stove not five minutes previous to the alarm and found it all right, and the fire when discovered was at the ceiling, and not on the floor.

The mill contained about 1,300 bushels of wheat besides a large quantity of other grain owned by Mr. Greenaway. He bears his loss very bravely and thinks that if a reasonable bonus could be secured, he would rebuild as soon as possible. The loss of the mill will be a severe blow to this village and will also be severely felt by the farmers of this vicinity as there is no mill nearer than Howell and Williamston. There is a large territory of the finest wheat growing land in Michigan tributary to this village and the inconvenience to the farmers for miles around will be greatly felt by them as well as by the business interests of this village.

The mill was originally built by Messrs. Fish & Palmerton, in 1855-56, and after various changes was purchased by the Greenaways, Henry Greenaway taking charge and conducting the business until about twelve years ago when Edward Greenaway moved to this place and the two brothers were associated together until something over three years ago when Henry sold his interest and retired from the firm, since which time Edward has had full charge. The mill was changed several years ago to the roller process at a cost of many thousand dollars and new and expensive machinery has also been added since and it had a fine reputation for first-class work.

A couple weeks later, a subscriber to the newspaper posed the question ~~

Shall We Have a Mill?

In the loss of the grist mill on March 5, the people of this village and vicinity met with a serious loss. A loss which everyone should feel a deep interest in seeing repaired. The custom business of the mill had doubled in the last three years under the able management of Mr. E. Greenaway, which will attest the great importance of such a plant to the business interests of our place. Mr. Greenaway has several flattering offers to go to other places, can we afford to let him go? We understand he offers to rebuild at once if the people will raise a sum sufficient to put up the mill frame and enclose it. Can we afford to let this proposition go? Everyone should feel a deep interest in this matter. Let us all put our shoulders to the wheel and help to replace the last and only manufacturing plant we had.

And then, a notice was published in the paper as follows:

A public meeting of the citizens of this village is called to meet in the council room on Monday evening next to consider some proper steps to take in securing the erection of a new mill at this place. Already the loss of the mill is being heavily felt in the way of a loss of all kinds of business and it is time to make a move and make it promptly. Everybody turn out!

As a result of that meeting,

The Mill Question~~The mill question is still a question. As per announcement in these columns last week, a meeting of the citizens was held in the council room on Monday evening and after some very sensible and favorable talk a committee of G.L. Adams, W.B. Gale, J.L. Cooper, Geo. Lovely, A.J. Wickman, and D.C. Carr were appointed to circulate petitions to the council asking that a special election be called to vote upon the proposition of raising a bonus of one thousand dollars by a tax upon the corporation, as E. Greenaway had stated that he would rebuilt the mill if a bonus of $2,000 could be raised and he also stated at the meeting that he would take $1,000 from the village and run his chances of getting the other $1,000 from the surrounding country. The proposition from Mr. Greenaway was even better than was expected and the meeting was quite an enthusiastic one.

The committee started out with the petitions on Tuesday morning and after a canvas of about half the village, found so much opposition to the movement that it was given up and the matter stands where it did before anything was done.

It is not the province of this paper to dictate what shall or shall not be done in this matter but it does seem too bad that one of the best wheat growing sections and one of the most prosperous villages in the United States should be without a grist mill. There is a wide scope of territory surrounding this village, one of the finest farming sections of the world and yet they must go miles to mill. The other villages are enjoying the pic-nic.

Rumors circulated that someone else was considering coming into the village to build a grist mill but a week after that was reported, it was written in the local paper:

The grist mill question seems to be laying rather dormant at present. This ought not to be so. We can hardly afford to sit down and calmly fold up our hands and not even make an attempt to do something to rebuild or get someone to build this much-needed industry.

New Grist Mill~~The question of a new grist mill is now a settled fact. Mr. Edward Greenaway has secured a sufficient bonus to warrant in and putting up a first-class mill and the work of clearing up the debris from the burned site commenced on Wednesday morning and the work of putting up a fine new mill will be pushed as fast as possible. The new mill will contain nothing but the very best machinery that money can buy and of course will have all the latest improvements for making the very best flour. Everyone who knows Mr. Greenaway at all knows that he takes great pride in having the very best the market produces and takes a very pardonasble pride in having nothing but the best, and all will feel assured of the success of the new mill.

And then weekly progress was reported in the local section of the newspaper:

~~Edward Greenaway has let the job of putting up and enclosing the grist mill to D.K. Fuller, a contractor and building, of Lansing, who commenced the work on Monday. The gentleman has had considerable experience in the construction of mills of this kind, is the reason given by Mr. Greenaway for securing outside help. Mr. Greenaway thinks he could have secured lower figures from contractors here but owing to its peculiar construction, wanted a man who had experience in such work. The work will be pushed as fast as possible. The contractor will employ local workmen if he can secure them.

~~The steel siding is being put upon the grist mill this week.

~~Joseph Tunnard, of Howell, commenced the work of building the brick engine room for the new grist mill on Tuesday. He will also erect the large brick chimney.

~~The contractors have completed their work of enclosing the grist mill and have returned to Lansing.

~~Joseph Tunnard fell from the scaffold at the grist mill on Saturday and struck upon his head on a pile of coal. He received many cuts and bruises about the head and face, but fortunately no bones were broken. The coal doubtless saved him from more serious injuries.

Construction was progressing nicely, but then,

~~The smokestack at the new grist mill blew down on Thursday afternoon, being insufficiently stayed. (It was raised a week later.)

~~The machinery for the new grist mill is expected next week. A great many anxious inquiries are being made as to when it will be ready for business.

~~The smokestack at the new grist mill, which was blown down by the wind a few days since, was again placed in position last week by Chas. Grant. Another set of stay irons were added this time and it will probably be able to stand the storm.

And now, finally, for this very long post about the old and new grist mill, this article appeared in the local newspaper late in the year, 1895:

The new grist mill is completed and began grinding this week. It is one of the finest and best constructed mills in the state and contains all the latest improvements in machinery and was erected under the immediate supervision of Mr. Greenaway, who is a practical miller. It is an institution that each citizen will point to with pride and all will wish it abundant success.
Posted by amuse me at 1:10 AM

By the way, Don read that the place in Fowlerville where he had his chickens butchered closed! He is planning to raise up to a 100 meat birds this spring, and now that that place is gone, he doesn't know where he'll turn!