In the late 1800s, Fowlerville was flourishing. The census-takers showed an increase of 18 village residents from one taken four years earlier. The downtown area merchants filled all the available storefronts with their wares. And houses available for occupancy came at a premium. All of this according to G.L. Adams, the editor and publisher of The Fowlerville Review -- a man who was a great supporter and "cheerleader" for the village. A short article found in the local section of the newspaper illustrated this beautifully:

L.F. Herning has purchased the business lot adjoining Kuhn & Miner and ground was broken on Wednesday for a brick building, which he expects to occupy with his meat market as soon as it is completed. Gradually the vacant spaces are being filled up and our business streets some day will present a solid brick front. 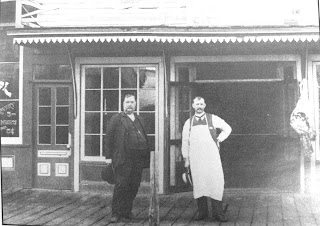 The above picture has been labeled as L.F. Herning's meat market, but was this truly brick or did he go a different route? By the end of the year, the following article, published in The Fowlerville Review, spoke of the finished building:

The Finest in the County~~There are many buildings and institutions located in this village that would do honor to any city of many thousand inhabitants and the latest addition in which the citizens of this village may take commendable pride is the elegant new palace meat market of L.F. Herning, which has just been completed and made ready for occupancy. It is a brick structure, built by Joseph Tunnard, and is one of his best jobs, with patent metal ceiling, laid out in square panels of raised work and catches the eye as soon as the building is entered. The ceiling is painted a pure white and the woodwork is natural pine, finished in oil. It is the work of J.G. Spencer and is an elegant job which has won him considerable commendation. The office is a glass enclosure at the right of the entrance and is a thing of beauty, elegance and convenience, extending from floor to ceiling, designed and erected by contractor Lewis Cobley. The cooling room is the celebrated Stevens patent and is so arranged that any degree of temperature may be secured and maintained, with complete circulation of air and drainage including trap for the drain which will allow no foul air to enter from that source. An elegant circular marble top counter stands in front of the cooler with a fine set of balances and two manufactured patent blocks completes the furniture of the interior. It is by far the most complete and finest furnished market in Livingston county and a credit to the enterprise of its owner. 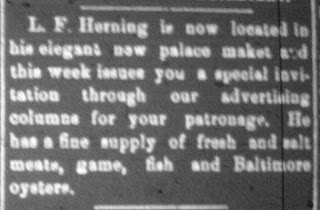 And during hunting season, a couple short blurbs were found in the local section to the effect, L.F. Herning displayed seven fine deer at his market on Saturday, and, L.F. Herning has the thanks of the editor and family for a liberal supply of fine venison, with which his market has been very liberally supplied during the venison season. We have all the advantages of a city market.

And then, in 1895, Through his agent, L.F. Herning, Samuel Post has purchased the McKeever lot and now owns the three lots between the post office and L.F. Herning's market. Mr. Post says he will build the finest block in the village, a double store and a single one. The stone for the foundation will be drawn this winter and the work will commence early in the spring.

But, what there's more! Later in the year, a couple short articles were published as follows in the local paper:

~~The L.F. Herning building has been subjected to a thorough course of repairs during the past few days.

~~Mrs. L.F. Herning has purchased the Whitacre residence on Grand River avenue. The tumbledown condition of the house has been a thorn in the happiness of the residents of that street for some time and they will be very glad to know that the dwelling will be removed and a fine new cottage erected in its place. Mr. and Mrs. Herning have made many improvements since they took up their residence among us and this last venture promises to be not the least among them.

Curiously, the Whitacre house, although "tumbledown" was not destroyed but moved to two lots purchased by John Lockwood from Isaac Page.