In 1883, Dr. C.H. Lamoreaux, formerly of Linden, has moved into the Bignal house, in the eastern part of the village, and will practice his profession. A room is being fitted up on the second floor of the old Glenn store in which he will open an office next week.
And,
Dr. C.H. Lamoreaux has swung his sign in the breeze and is comfortably situated in his office first door south of Loughlin & Schroeder's. 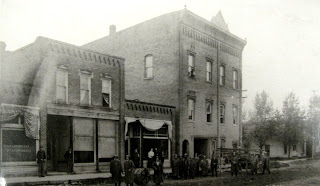 And so, with these two short blurbs published in The Fowlerville Review, Dr. C.H. Lamoreaux began a lengthy career in Fowlerville. Eventually, in later years, his office would be south of the newly-formed fire company, which was originally located at the southwest corner of Power Street and North Grand Avenue. At the right of the above picture, the Lamoreaux name can be seen printed on the front window.
Posted by amuse me at 1:10 AM