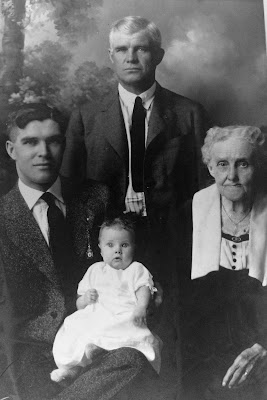 As mentioned in yesterday's post, I spent some time at the Bentley Historical Collection.  I had a chance to delve into a box labeled "Blackmer/Farmer" family photographs and papers.  Most of the pictures were of those family members while still living in Milan, Michigan.  But I felt very fortunate to come across the above family portrait of marked with the notation "four generations."  In the picture are "Emily Blackmer, son Thurlow, his son Deo, Deo's daughter Reona Jane."

Thurlow, standing, was S.T. Blackmer, the owner of the clothing store here in town.  Deo was his son, and this picture would have been taken shortly after he returned from serving in World War I.  Reona Jane, Deo's daughter, graduated years later from the Michigan Agricultural College in East Lansing.
Posted by amuse me at 1:10 AM