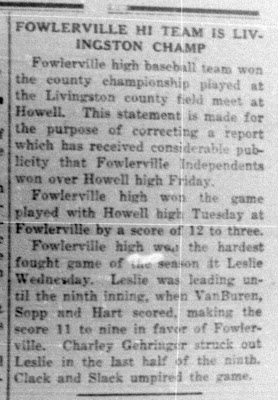 As I've been working my way through files and files of digital pictures of The Fowlerville Review, it occurred to me I had not come across anything regarding the high school ball team or Charley Gehringer -- and then it occurred to me I was looking at 1921 information and that would be about the time Charley was in high school. And then I came across the article above noting he "struck out Leslie in the last half of the ninth."
A few weeks later, Young Gehringer, Fowlerville's third baseman is a swell little player. He is a cool and steady fielder as well as a fair hitter. He and the other young players on the team should make strong talent for next year.
Posted by amuse me at 1:10 AM

How about Clack and Slack umpiring the game! Am I reading that right?

Not sure who Slack was but there was a Clack who was the train station master for Fowlerville during this time.