There are so many wonderful pictures in the Fowlerville Historical Collection, and too many of them have no names listed on the front or back. But this one caught my eye because it was made into a postcard -- picture on the front and a typed message on the back.
Enjoy . . . 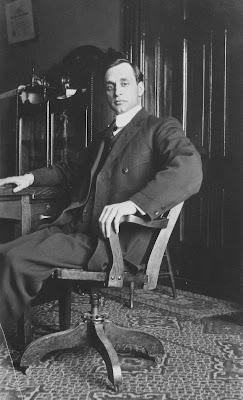 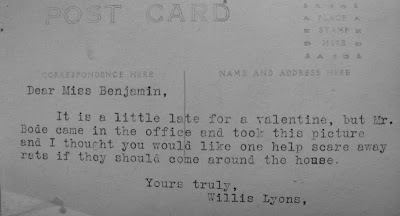 As I was steadily working on the biography, lo and behold, I came across a blurb in The Fowlerville Review, reprinted from the Tidings newspaper out of Howell, regarding one Willis Lyons. This was the first time I had ever noticed his name. It read:
When Willis Lyons was a soldier in the 34th Mich. Inft. in Cuba, he was detailed with others to bury six comrades who were dead. Their friends have been trying to locate their graves and have written the County Clerk to know if he could find them. He is sure he could do so and said when he left for Grand Rapids, for the State Republican convention, that he expected to go to Cuba before he returned.~~Tidings
And then I came across:
Willis Lyons is out with a communication to the Livingston Republican in which he announces he is not a candidate for renomination.
And then I came across the following published in a Howell newspaper:
Monday, Willis Lyons returned from California with the remains of Mr. Ranseler Drew, who dies in San Francisco, April 15, 1910, aged 72 years. Mr. Drew, having no relatives there, lived alone and when taken sick went to the home of an old neighbor where he died after a sickness of two weeks. Mr. Drew was born in Marion, the son of Townsend Drew, but for many years, has lived in California. He leaves property appraised at $7,000 or $8,000 consisting of $4,000 in bank, two or three houses and some vacant lots. He is a brother of Sheridan Drew of Marion, and other relatives live here.~~Republican 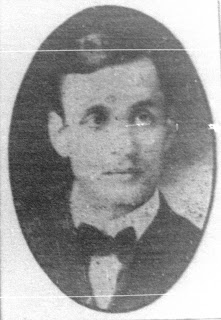 In 1910, Mr. Lyons then ran for public office, with William E. Robb running against him as the Democratic candidate:
Willis L. Lyons~~Republican Nominee for the Office of P rosecuting Attory. As a candidate for Prosecuting Attorney, Willis L. Lyons comes before the people as no stranger. His manner of working his way through school is too well known to need repeating. His admission to the bar came as the result of five years of hard study. He was compelled to make proof of three years' study a certain number of hours per day, before being permitted to take the examination. The State Board of Law Examiners at that time were L.T. Durand, former Democratic candidate for Governor, R.C. Ostrander, now Justice of the Supreme Court, Professor Lightner of Detroit College of Law, Judge Brown of Big Rapids and Wesley Hyde of Grand Rapids.
His record as a student, a soldier, an official and a lawyer, in fact the manner of young man he actually is, speaks for itself.
Up to six years ago, Mr. Lyons' health was affected some by the fevers he had in Cuba, but since then he has hardly missed a single day because of sickness.
He has had considerable experience in the courtroom; in fact, he has assisted as clerk of court or attorney in all the trials in the Circuit Court for the last ten years besides being more or less connected with the general legal affairs in all the county offices.
He has had cases in all the different courts of the state; some of these cases in the Circuit and Supreme Courts, viz: Hoyt vs. Garlock, Keil vs. Township of Hartland; Allen, Admix vs. Telephone Co.; North vs. Telephone Co., in R. Would's Estate; Phelps vs. P.M.R.R.; Bristol vs. Bristol and many others.
He took the nomination for Prosecuting Attorney, there being no other candidate in the party, and it is up to the people to say whether or not it was a mistake.~~Brighton Argus
Ultimately, Mr. Lyons lost to Mr. Robb.
Posted by amuse me at 1:10 AM