The following old photograph is one of my most favorite finds while I was working on my book, The Fowlerville Chronicles, shown to me by Clayton Klein.  Mr. Klein and I met at the library one afternoon and we spoke for about an  hour or so, him confirming a few things in my early manuscript.  He had a small 5"x 7" envelope with him, which I didn't really notice until he pulled out this picture.
He didn't know where in Fowlerville this was taken, thinking it might have been on North Grand Avenue.  At that point, I had done just enough research, it only took me a few minutes to identify it.  The photographer stood in the middle of East Grand River and pointed his or her camera southeast.  The building at the right side has been many things and is now an eyecare storefront, the middle building was a dime store for many years and now a gaming storefront, and the house seen at the far left no longer stands at that corner.  Sometime, probably fairly shortly after this picture was taken, the house belonging to Dr. Defendorf was moved to 701 East Grand River and his office to 235 South Collins.
Today, a parking lot is at the corner where the doctor's house and office used to stand.  Following are the 'then and now' squint shots: 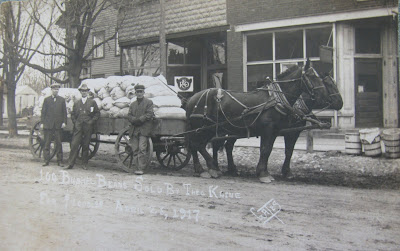 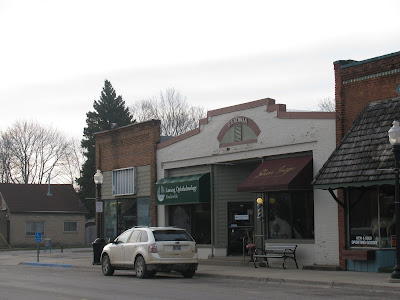