We are back to more 'then and now' shots after a short break to check out South Hogback Road.  In the early 1900s, the storefront now being used by Sweet Sensation was a meat market.  And there was a fire inside that prompted someone taking this old photograph of a fire brigade.  Scorch marks can be seen on the brick above the right side front window.
About thirteen years ago, when we moved into the area, this storefront was empty but there was obviously work being done on the inside.  We would walk by it and talk about how great it was that someone was doing something -- we just didn't know who or what was going on.  In the early 2000s, the Pardees opened their chocolate store and we have all been better for it.  They refurbished the inside showroom and the basement, and added to the back of the building.
One of the areas they left intact was an old meat locker which is now used as an office.  The walls are six inches thick with a safe-like door.  Sometime back I did a series of squint shots of the inside of this store -- look back and enjoy the information.
For now, here are the two pictures -- old and new: 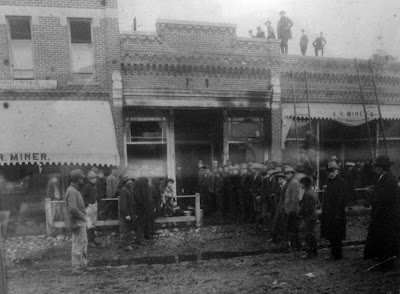 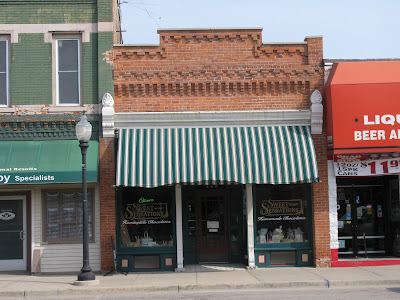